Strategy on How to Play Addiction Solitaire

Before we begin, we want to clarify that the word “addiction” in the title refers to the name of the solitaire card game and is not related to behavioral issues. Afterall, our company’s goal is to educate people on how to stop addiction. 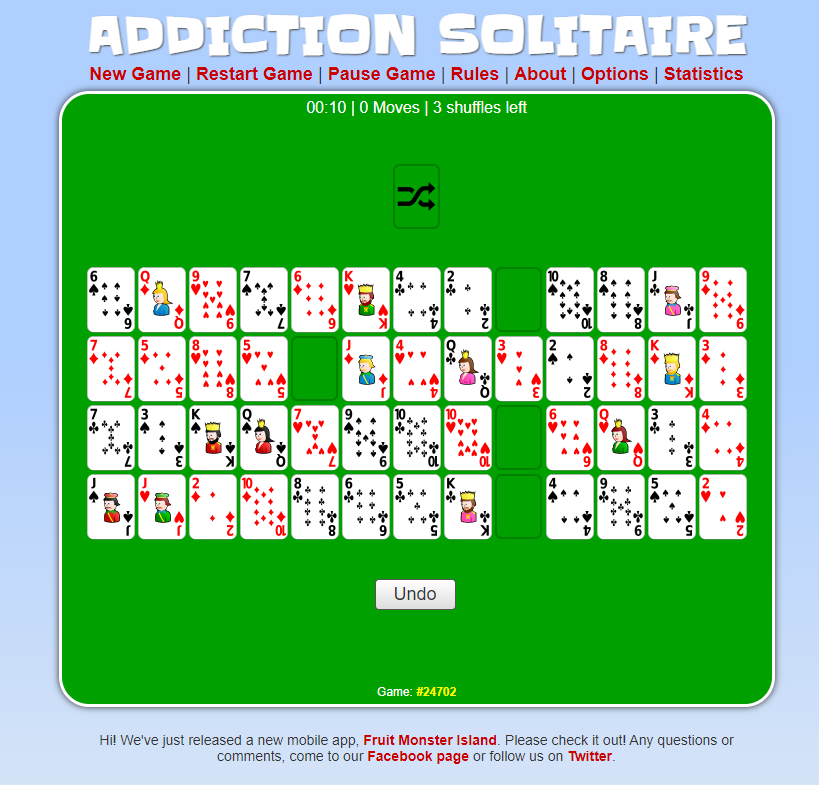 You may ask why we post a blog about playing a card game. The reason is simple- we want you to know that learning card games without over-indulgence is healthy for both mind and body. Many studies reveal that Spades and other card games are good mental exercises. As long as you are a responsible player, the  addictiveness of the card game Solitaire will not be part of your bad habit.

The goal of Addiction Solitaire is to sort all four rows in ascending order from two to king. Each role must be of the same suit. For more thrill, some players assign a time limit that would force them to complete faster. Whether you would like to do it, that is up to you.

The basic rules are: after the deal, the Aces are removed to create four blank positions. So, the 52 cards were laid out in 13 columns and four rows. Then, the Aces were removed, creating four empty places. Cards can be moved into blank positions one at a time.

A card can be moved into a blank spot if it follows the previous card to the left in both suit and value. For example, a four of spades can be moved to a spot to the right of a three of space or to the left of a five of Spades in chronological order.

You can move a card to a blank spot provided that the card to the left is of the same suit and have one lower rank. Remember, the objective is to create four rows of cards in chronological order and of the same suit. A two of any suits can be placed in the leftmost column. Once there, it sets the suit for the entire row.

Choose your suit carefully because it’s key to your success for the entire game. Remember that you need to make a row of chronological cards in the same suit.

Now that you know the moves, it’s time to discuss the shuffle.

You may shuffle the cards on the table three times in a single game. When you shuffle, cards not correctly placed on the board are moved to a random position. Since the cards that are already in their proper position will not move, shuffling the board will not make you lose progress. Instead, you may find yourself in a better position to advance.

Cards are deemed to be in the proper position if they are:

All leftover cards will be shuffled and redealt to the remaining spots.

The basic approach in addiction solitaire is to decide where you want to make a space (start with the leftmost column) and then find out how to do it. Start with the card that is at the spot you want to free. This card is only allowed to be placed at the right of the card of the same suit and one rank lower. If there is a clear space to the right of this card, you can move it straight away and be done. If there is no open space to the right, you must figure out where the card to the right may be relocated. Repeat this step until you can move a card, then proceed backward until you can free the spot you were thinking about.

After you’ve made a space in the leftmost column, carefully consider which Two you’ll place there. Ideally, some correctly arranged cards are now on the right.

Avoid making holes to the right of the Kings to prevent becoming trapped and having to rearrange. The rightmost column is the best spot for a King since there will never be a gap to its right.

Finishing one row significantly ahead of the rest will result in a blank area you cannot use. This is not an ideal move.

Playing Addiction Solitaire and other card games for enjoyment is a treat. However, make it a habit to set some boundaries on how often and for how long you will play it. Use it as a way to socialize, and don’t be like other individuals who retreat from social life. Addiction Solitaire, or any card game, can be very addictive. Self-control is always the key.